We spent the weekend visiting Evan.  He was supposed to have a twenty-four hour pass but it was revoked at the last minute due to aggression.  However, his therapist was very understanding of the distance we traveled and gave him a ten hour pass.  When we arrived we took him out to dinner.  He was pretty keyed up about seeing us and was wide awake.  This was unusual because typically he goes to bed very early.

The kids were especially excited to see him.  Being Evan, he had gifts in hand for each of the boys.  On the first night he gave them a toy motorcycle.  He had also colored a picture for me.

On the ride from dinner Evan had fallen asleep in the car.  While walking up the path to the center he sleepily inquired “Momma, do you see our shadows?”   I smiled and acknowledged that I did see them looming ahead. 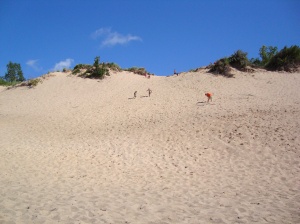 We picked Evan up early the next morning.  This time he presented each of his brothers with a coloring book.  We stopped by Target to grab snacks for the cooler.  Then we ate an early lunch and headed for the beaches located at the Dunes.  Ethan and Evan were in awe of the sand mountains and couldn’t wait to climb them.  Nicholas, an old pro, gave them pointers as they raced up Mount Baldy.

Almost at the top

It was a beautiful day for beaching.  It was not too hot, the sun was shining, and the air was breezy.  The water was full of waves, too.  Evan was busy collecting rocks (which gave me an idea for a Christmas gift) while I buried Nicholas in the sand turning him into a merman.  Ethan pretended to be a surf board while my husband sat back enjoying the scenary.  Jazmine spent the weekend with my brother.

After enjoying the water for a couple hours we headed to the LightHouse Premimum Outlet Mall for a little shopping.  Then we went to another beach to see the lighthouse upclose.  Usually we like to walk on the big jagged rocks that border the lighthouse walk, however, due to the choppy water and high level of bacteria at this beach, we used the catwalk that is suspended above.  When we reached the lighthouse I was able to take some great pictures.

Nicholas getting wiped out!

We spent the rest of our time eating elephant ears, feeding the ducks, walking the gardens, and watching the boats in the harbor.  Our final stop was for dinner at Red Robin’s.

It was sad saying goodbye to Evan.  To prolong the visit he talked nonstop as I signed him back into the center.  I can only hope that this extended time with us gave him some motivation to hurry up and come home!